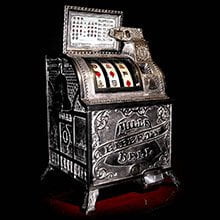 Modern day slot machines began with an invention of a poker based game in 1891 in Brooklyn, New York. Here, Sittman and Pitt invented a machine with five drums containing 50 cards. The player would insert money, pull the lever and wait for a five card poker hand to be displayed from the drums. Unlike modern slot machines, there was no direct payout on these machines. Instead, players were rewarded for different poker hands by the establishment that owned the machines. Winnings included goods such as beer and cigars.

In 1895, German immigrant Charles Augustus Fey invented a game more similar to the modern day slot machine. Rather than drums, this new machine had three reels, and the cards were replaced with five symbols; hearts, diamonds, spades, horseshoes and cracked Liberty Bells. More importantly, this machine was the first mechanical slot machine to have an automated pay out. It was called the Liberty Bell as the highest payout was given for a display of three Liberty Bells. However, this payout was just half an American dollar – a miniscule amount compared to what can be won now! Fey continued to develop his ideas, introducing a number of other machines, such as the 4-11-44 and the Card Bell, and by 1899 was producing these machines in his own factory. His original machine can still be found in a restaurant in Nevada! 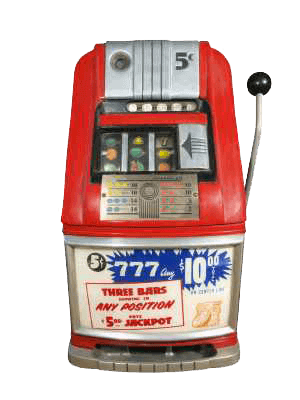 Despite being the first to produce a slot machine like we know it, Fey was not without competition. By 1905 a Chicago company had released the Mills Liberty Bell, a variation of Fey’s original machine. There is some debate surrounding how this machine came to be produced; some say that Fey refused to sell his machines to anyone but that one was stolen, and just months later Herbert Stephen Mills had introduced his own. Others say that Fey simply agreed a business deal with the Mill’s company and that they produced this new design together. Whatever the story behind it, this machine became more popular than others before and by 1910, slot machines were everywhere in America and the Mill’s company had expanded into Europe, now manufacturing 30,000 gaming machines.

Not even the laws passed by the American government in 1909 to ban slot machines that dispensed money prevented their increasing popularity. Instead, slot machines returned to acting as trade stimulators which provided prizes for certain combinations, rather than cash. The theory is that this led to the popular fruit and bar designs of slot machines today. The fruit was a symbol of the flavoured sweets and gum to be won and the black bar was the Bell-Fruit Gum Company trade mark. The first machine to display these fruit symbols was the Operator Bell created by Mills Novelty Company.

By 1919 the US Government had also banned the consumption and supplying of alcohol. This impacted on the development of slot machines as those establishments that continued to serve alcohol resorted back to the cash dispensing machines believing that, if they were to break the law anyway with the selling of alcohol, it would be worthwhile to have the more popular style of slot machines. This increased the popularity of the machines even further.

With the 1930s came further developments of the slot machines. The Silent Bell was introduced as a much quieter alternative to the original games, and a double jackpot was introduced, allowing the player the opportunity to win multiple times in quick succession. As well as this, manufacturers started to create a variety of cabinet designs, opting for the use of cheaper wood rather than cast iron. These designs included the Lion Head, Roman Head and Castle Front and allowed for more variety in the game, holding a players interest for longer. 1931 also saw the legalization of gambling in Nevada state which allowed the manufacture and play of these games on a new level. 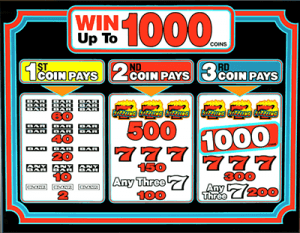 Slot machines were later advanced by pinball manufacturer Bally in 1964. At this stage, Money Honey was introduced that ran electromechanically, had additional sound effects, could take multiple values of coin and was the first slot machine to have a coin hopper. A coin hopper is a holder that winnings are paid out into and allowed for bigger payoffs per play, without having to stop play to be paid by hand. By 1970, the hopper was made big enough to hold dollar coins, again leading to the potential for bigger payoffs. Bally dramatically developed the slot machine with Money Honey and continued to push change. By 1978, Bally controlled 90% of the slot machine market and had introduced an upright slot machine called Hi Boy. Also around this time, Atlantic City legalised gambling and wagers were raised on slot machines so that they could be played at $5, $25 and even $100!

The next step towards the modern slot machine was the introduction of electronic machines with virtual wheels. In 1994 Game Maker, manufactured by Bally, made these electronic slot machines popular. However, International Game Technology now has a significant control of the slot machine market and was the first to use random number generators in their machines. Random number generators within these machines simulate the spinning of reels and produce an outcome at random. This allows for greater variation in odds which leads to a bigger build up of a jackpot. It also meant that it was no longer necessary to have a lever. In addition, it is now possible for slot machines to be linked to each other, allowing for multimillion jackpot prizes to accumulate! These are known as progressive jackpot slot machines.

Finally, in the 1990s, slot machines took to the internet like all other popular casino games. Online slot games give the casinos much more freedom to develop the graphics of individual games, to give huge variation in the themes that can be played. As a result, thousands of people play slot machines online across the world.