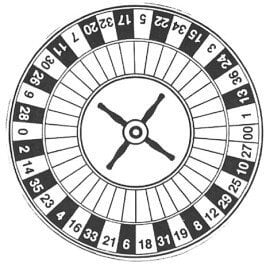 Originally created by physicist Blaise Pascal in an attempt to create a perpetual motion machine, the roulette wheel took off as part of the ingenious game in France around 1760. Since then many variations have been created and adaptations made to give us the roulette wheel as we know it.

Today, there are two types of roulette wheel, the American and the European/ French. The basic features of these roulette wheels are largely the same; each display numbers 0-36 (to the sum of the devil’s number 666!) which correspond to a certain pocket on the wheel, each have numbers alternating in black and red colour, with zeroes marked green, and each place these numbers in a carefully thought out but non-numerical order. However, despite the fundamental similarities, these versions have some important differences.

Most notably, the American roulette wheel has two zeroes giving a greater house edge to the casino as any landing on a zero allows the casino to take all bets, other than those that bet on these numbers. Some early American wheels had an additional Eagle slot which was also a house slot, but these wheels are now extremely rare and incredibly expensive.

As well as the additional house slot in American roulette, the order of the wheel numbers is different in the two versions. Although each system attempts to evenly distribute numbers, the American wheel is deemed to be less balanced than the European version as high and low numbers are less well alternated.

The first wheel to be created in France also had two zeroes. However, when Germany tried to compete with the French casinos, they introduced a roulette wheel with just a single zero, lowering the house edge and therefore attracting more customers. This version then became increasingly popular across Europe.

Despite being seen as better balanced than the American version, the European roulette wheel has unusual asymmetries. For example, on the left hand side you will find all low black numbers and all high red numbers, and on the right the opposite. It is also interesting to note that the 9-number sector 29-7-28-12-35-3-26-0-32 has no number from the second dozen. 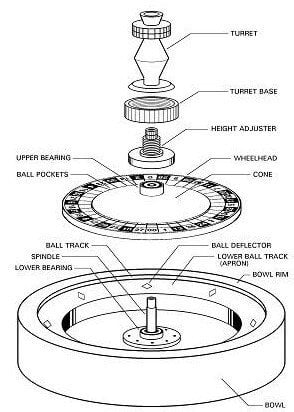 The name of the roulette game is prediction and the job of the casinos is to make this game as difficult as possible. This can be done in a number of ways.

Firstly, the wheel numbers are ordered in such a way that appears random. This has benefits for the casino in that it confuses players and makes it difficult for an inexperienced player to visualize the wheel, thus making it more difficult to spot bias in the way that the wheel spins.

Secondly, it is the chaotic bouncing of the ball that makes roulette so difficult to call. Casinos make good use of this by adapting the wheel to encourage this chaos, with the added benefit of keeping the game interesting to look at. For example, reducing the depth of the frets between pockets visually alters the way the wheel appears and will increase bouncing of the ball making it more difficult to predict and increasing the opportunity for a sense of a ‘near miss’.

Finally, casinos alternate between small (18mm) and large (21mm) balls which again alters the bounce making the game less predictable. Similarly, the dealer can change the way that the ball is released onto the wheel, altering it’s course around it.

There is a lot of money to be made in the game of roulette and it is unsurprising therefore that there have been many attempts to cheat the game.

The man who broke the bank at Monte Carlo: Joseph Jagger

Suspecting that there would be bias in a wheel’s spin due to imperfections when making the wheel, Joseph Jagger, with the help of 6 accomplices, set about recording the numbers that occurred at each roulette table at the casino of Monte Carlo. Having done this, Jagger noticed that one wheel was bias to a set of nine numbers and, through exploiting this bias, won himself £60,000 in just three days. This was in 1837 and today, this would be the equivalent of a staggering £3,000,000!

Similarly, and more recently, Gonzalo Garcia-Pelayo monitored and recorded the outcomes of a wheel in Madrid in the 1990s and in doing so won €600,000 in just one day!

In 1982 British casinos began to lose a lot of money as a result of this biased wheel section betting and a new ‘low-profile’ wheel was designed which had several modifications, including reducing the depth of the pockets. After a staggering win of $3.8 million in a US casino, this modified wheel took off making it much more difficult for individuals to predict the spin and bias of a wheel.

As well as monitoring for bias, more sophisticated means of cheating the roulette game have been devised in the form of mathematical algorithms. Separately, Doyne Farmer and Michael Small and Chi Kong Tsehave devised such algorithms, both based on the motion of the ball as it leaves the dealers hand and rolls around the side of the wheel. For Michael Small and Chi Kong Tse, this relied on the physics of friction which allowed them to predict the half that the ball would land on 13/22 times. As this is above 50% it would allow a patient roulette player to make a profit! Doyne Farmer instead relied on calculating air resistance.

In 1961 Edward Thorp and Claude Shannon created the first wearable computer for predicting the fall of a roulette ball, taking into account the speed of both wheel and ball.

Unfortunately, these cheating methods too are flawed as they require a) a computer devise to monitor aspects such as speed which would be easily detectable (and poorly received!) in a casino environment and b) can be reduced in effectiveness by the casino methods mentioned above, such as altering the way a ball is released. Today, casinos take great care in ensure that roulette wheels are created with minimal imperfections to avoid bias and check their wheels regularly to prevent any loss due to bias detection.

Additionally, the game of roulette has blasted onto the internet with thousands of roulette games to be played online for a more convenient game where the wheel can be modified from the colour of the cloth to your preference for an angular or rounded spindle, you can even choose to spin multiple balls on the same wheel or to play multiple wheels at once as these examples of online roulette games show.