Betting the River in Poker

The heart of poker lies on the river. If you don’t know what that means, then you have obviously never played the game. Though hands can be won and lost at a number of different stages, the river is when the pressure is on and there’s no room for error, this is because, during every other betting round, each player has a chance of improving his or her hand with another card. After the river card is dealt, there’s no saving grace waiting around the corner. With that in mind, there are only a few types of bets that get placed on the river. You will either see a bunch of value bets or you will see people trying to bluff at the pot. You have to be prepared for different river scenarios, which will become more comfortable once you play a lot of poker. I’ll break down some common instances where you need to have a first grasp of betting the river in poker.

In this hand, let’s assume that you are playing from middle position. Your play here might be to check-raise off of the flop in order to add some more value to the pot. You execute the check raise, then have two players (one in front of you, one behind you) make the call.

A bunch of different things can happen with the turn card. Your hand can improve or your hand can get weaker based upon the turn. Let’s assume that you hit the jack of clubs, giving you three of a kind. In this instance, you would bet, and have the two players call your bet. We move on to the important part of the hand – the river. 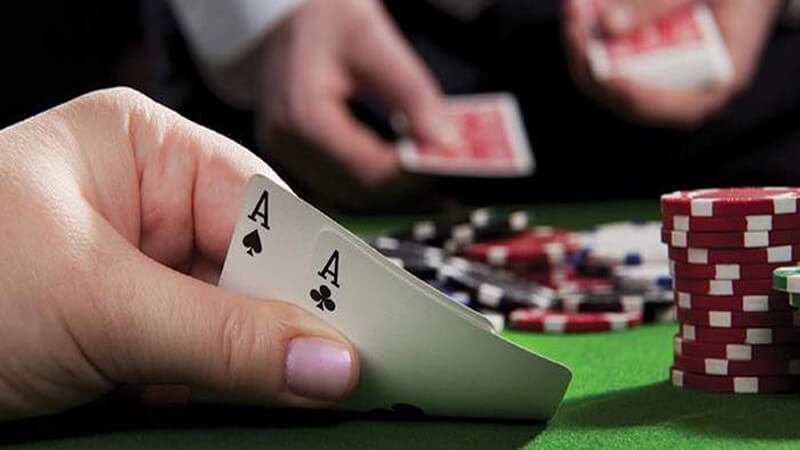 The Final Stage in a Game of Poker

On the river, your hand doesn’t improve and things get a little bit scary. A ten of spades hits the board, which means that there is a straight draw out there, but not a flush draw. Out of nowhere, the small blind bets right in front of you and you have to act with another player behind you. This situation is difficult for many players, as they aren’t exactly sure what course of action to take.

It’s fairly obvious, in this case, that you can’t and shouldn’t fold down your hand. The pot is too big and you have too much pot equity to consider laying down what might be the best hand out there. Your trips is a solid hand, especially considering your kicker. With folding out of the question, you have only two other options. You can either call the bet or make a stand with a raise. In this type of scenario, I would only make a call. This move makes sense for a number of reasons. On one hand, calling means that the player behind you will probably call, as well. This puts more money into the pot, which benefits you if you hold the best hand. If you choose to raise, however, you will more than likely be forcing the player behind you out of the hand. In addition, if the small blind made a straight on the river, he is going to re-raise you and put you in a tough position. If you were to raise and he didn’t have the straight, then the small blind would likely only be calling your raise. In this case, you will be winning the same amount as your would were you to simply call the bet and have the player behind you call the bet.

This is only one scenario and there are certainly many more that you will learn to master as time goes on and your play evolves. You have to learn to make these types of decisions, though, based upon the probability that you will be winning the hand.

When playing on the river, you don’t have the added worry of being beat on a draw. This is one less thing to worry about, which arguably makes river betting easier than other times during the hand. The key idea to keep in mind when betting the river is that you want to keep your focus on two things. Not only is it important to win as many hands of this nature as possible, but it’s also equally important to avoid big losses. Usually, the hands where you lose big are the ones where you expected to have the best hand. If someone draws out on you with the river card, you have to lay down your pride and lose the least money possible. Trying to get a few extra dollars with a raise can really backfire if you face a big re-raise and you’re forced to call.

One thing that can make river betting easier is playing the hand as an aggressive player. Obviously, the goal in poker is to put the maximum amount of pressure on your opponents, while minimising the amount of pressure on yourself. If you bet hard during the hand and you end up with a heads up situation on the river, then you hold the advantage. More times than not, you can dictate your opponents decision based upon the size of your bet. Sometimes, it’s best to throw caution out of the window and use your role as aggressor to force your opponent into making the wrong decision.

Betting the river can be scary, especially for novice poker players. There is always the chance that you could be beat, unless you are holding the nut hand. As you play more poker, you will see different situations and you will grow as a player. Experience is ultimately the only way to truly improve your play and build your bankroll. Advice articles can only take you so far, as you’ll probably have a quick decision to make when the live bullets are flying in your favourite poker room.