Of all the numerous dos and don’ts of poker etiquette, few rules are more confusing or controversial than the rule against talking about your cards while the hand is in play; poker talk. This can happen many different ways, and it is considered by turns rude, unethical, legitimate strategy, or just plain illegal, depending on the context and where you play. Any time you talk about the cards while the hand is still going on, you are giving away information, exerting an unnatural influence on the other players who are still in the pot.

At best, when the pot is heads-up and you are one of the two remaining players still in, this kind of poker talk is considered just another form of the psychological warfare that is undeniably a part of poker. At worst, most of the rest of the time in poker talk, you are giving an unfair advantage to other players yet to act. This is why the rule exists. Protection against collusion is also a factor.

Even after you have folded your hand, you should never carry on with poker talk and tell the other players what cards you held until the hand is completely over. Let’s say five players see the flop and it comes down Q-Q-7. Then one of the players who folded complains: “Shoot, I just threw away a Queen!” Now, let’s say one of the players still in the pot holds Q-3. Normally, he would be very worried about the possibility of some other player holding the 4th Queen with a better kicker. But not now. He knows his hand is golden because of the poker talk, so he can bet and raise with impunity, because the only hand he has to fear at this point is pocket 7s. Christmas came early for Mr. Q-3, courtesy of the clueless player who blabbed to the whole table about his folded Queen with his poker talk. Unfortunately, this sort of thing is all too common, especially in the lower-limit games.

But what really gets people’s dander up is when some players talk about their cards during the hand, in a deliberate effort to goad and manipulate their opponents. Usually this happens when a player has made a big bet or raise, and his opponent is considering a call. The poker talk might go something like: “I have Aces,” “I have the nut flush,” or even “I don’t have the flush,” “I just have a pair,” and so forth. Sometimes these statements are a complete lie; other times they are absolutely true. That’s where the mind games begin.

In regular cash games, players can often get away with this type of poker talk, depending on the location. In tournaments, this is illegal, although the technicalities can vary somewhat from one tournament to another. In a curious twist, some poker tournament rules that it is perfectly legal to engage in poker talk about your cards while the hand is in play as long as you are lying. But if you are telling the truth; big no-no, broken rule, get a penalty. Penalties can range from killing the hand, awarding to pot to the other player, to forcing the offending player to sit out of the tourney for a set amount of time, while his blinds and antes continue to be posted. 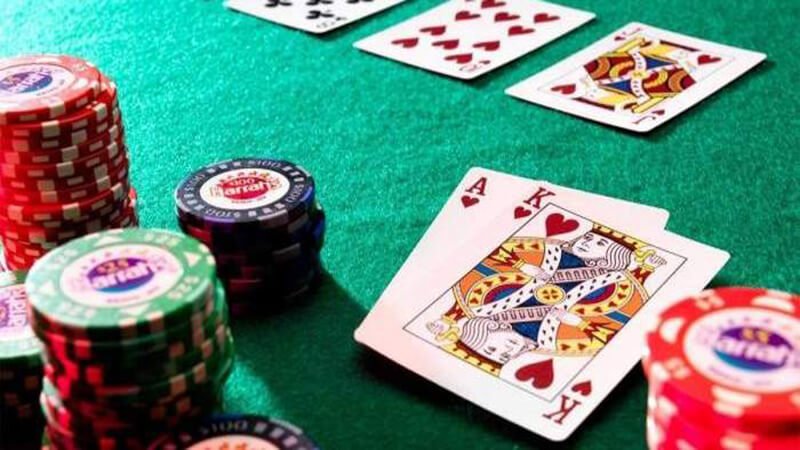 Televised Poker and the Poker Talk

You’ve probably seen professional players in televised tournaments probing their opponents with questions like “You have a pair?” “You have Ace-King?” “Did you miss your flush?” and the like, all while the hand is still in play. This kind of poker talk is different, and this is legal. Here, the pros are simply trying to coax information from their opponents. Nine times out of ten, they know perfectly well the opponent is never really going to answer the question, at least not truthfully. But they want to hear how he responds to their inquiry, to help get some kind of read or tell on how weak or strong he feels in the hand.

Even though poker talk of specific cards is often allowed in ring games, that still doesn’t necessarily make it good poker, or a smart thing to do. More often than not, it alienates the other players and creates an atmosphere of animosity at the table. This is a form of psychological warfare, and for some poker players that makes talking about your cards a perfectly legitimate tactic to use in the game. But for many other players, it’s unsavoury, it’s unethical, and it just doesn’t pass the smell test.

Yes, poker is a game of misdirection, a game of lying, a game of trying to manipulate your opponents. But if you want to goad an opponent into calling you, or folding, there are plenty of other ways to achieve this without getting into a discussion of specific cards. Many times you can accomplish the same thing with much more general statements. “If you call me, it’s all going to be over,” “I have the best hand,” “I don’t believe you have it,” and other statements of that nature can usually achieve the same result, without getting into that icky, semi-legal, hardly-ethical grey area that’s probably only going to make your opponent angry.