More than any other form of poker, Stud games can vary widely in terms of the relative size of the early forced bets (the antes, and to a lesser degree, the bring-in). The critical factor is how large the antes are in relation to the size of future bets, this makes all the difference in the world in terms of the correct playing strategy. Good Stud players should actively seek out games with an ante structure that favours their particular style of play. At the very least, Stud players should always be aware of the ante structure, and adjust their play according to whether it is high or low.

Low-ante games favour tight play. In a game with low antes, the cost of playing each hand is small, so you can afford to just sit and wait for the very best starting hands. And if your opponents in that game have any brains at all, they’ll be doing the exact same thing. Pots tend to be shorthanded, and smallish. There’s usually not a lot of action. Ante stealing isn’t really profitable, because there’s never much to steal anyway. And slow-playing becomes more advantageous – since the pots start out so small, you now benefit more from keeping your opponents in the pot when you hold a strong hand, so they can build up the pot on later streets.

The lower the ante, the tighter you should play. Naturally as the ante gets smaller and smaller, the game becomes more and more favorable to “rocks” because their preferred style of play actually becomes correct in that situation. In some rare cases, there are Stud games with no ante at all, and in these games you can theoretically sit and wait for only the most premium starting hands, such as rolled-up trips. 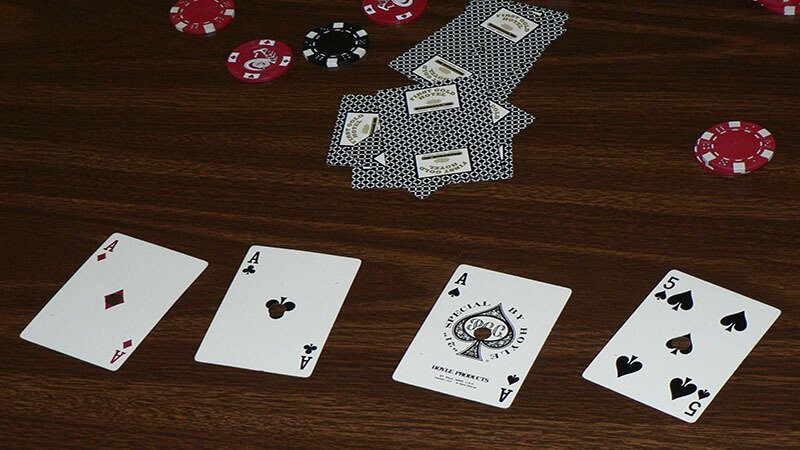 Higher-ante games favor loose play, and lots of action. In these games, you simply cannot afford to sit and wait for the best starting hands, because it’s costing you too much to play each hand. By the time you finally get a great starting hand and win a pot, you will have already lost more than what’s in the pot by virtue of the antes you paid out while you were waiting. So you must loosen up and play more starting hands, or your chip stack will get gobbled up by the antes. Again, if your opponents have any idea what they are doing in the game they will loosen up considerably as well, and you need to take this into account.

In high-ante games, the pots start out large, and so from the very beginning everybody is getting better pot odds on their hands. This means it becomes more correct to “chase” with sub-par hands such as smaller pairs, and of course drawing hands. The result of all this chasing will be a greater number of multi-way pots, which in and of itself alters the character of the game. Hands such as lone high pairs go down in value, while flush and straight draws increase in value. Because large-ante games favour the stay-in-and-chase strategy, these are good games for players like calling stations and maniacs, who are always going to stay in the hand anyway. In these games, ante stealing becomes a much more desirable tactic, while slow-playing usually becomes incorrect. With the pot now large right from the get-go, if you have a good hand you want to do everything you can to try and win that pot as soon as possible.

In a low-ante game, playing strategy largely gets reduced to simply waiting for the best starting hands. So luck becomes a more important factor, because it’s more just a matter or who gets the best cards. In a large ante game, a great deal of playing strategy goes out the window, since so many players are going to stay in to the end no matter what, with such a wide variety of hands, and again it often comes down to luck and who has the best cards. Which ante structure you should prefer will depend on many factors, most notably your own playing style and the playing styles of your opponents. All other things being equal, moderate-ante games offer the skilled Stud player the most opportunities to practice that skill.