When it comes to slow playing in poker online, caution has to be taken into account for the majority of hands. It’s a trend that is become more popular among new players, but you have to understand the dangers of slow playing in poker along with the benefits of that type of play. The main objective behind slow playing a hand in poker is to let your opponents have the chance to match your betting in an early round in order to set up the opponent for a future bet. More times than not, a player who hits two pair or better on the flop will try to slow play a hand in order to keep more opponents in the hand. The hope there is that the opponent will hang around long enough to either bluff at the pot or make the second best hand.

Slow playing in poker is popular in all poker venues, but it seems to have taken the online poker world by storm. Since poker is televised online much more in this day and age, there is more of an opportunity for novice players to learn from the pros, so to speak. The problem with this is that online players don’t take into account the overall scope of play that a professional player brings to the table. They only bring the slow playing aspect of the game. In addition, most novice poker players fail to realise what all goes into slow playing a hand for a professional player. Pros take the time to learn the weaknesses and the tendencies of their opponents, so they can make moves accordingly. Novice players aren’t afforded that option, especially when they’re playing online.

If you have played a lot of online poker recently, then you know that the online poker world is becoming a loose bunch of below average players. More and more novices are joining the mix, so they bring their inexperienced play to the tables each time they log in. More times than not, you will notice that six or seven players will see each and every flop, no matter what sort of raises are presented before that time. While a good player might only play a premium hand, you will be highly likely to run into 8-3 off-suit from at least one of these players. Before you can fully understand the danger of slow playing poker in an online setting, you have to realise that a ton of players will call your bet with any cards. Because of that, you have absolutely no idea what you are going up against. This is a very difficult obstacle to overcome for any player, whether experienced or otherwise. 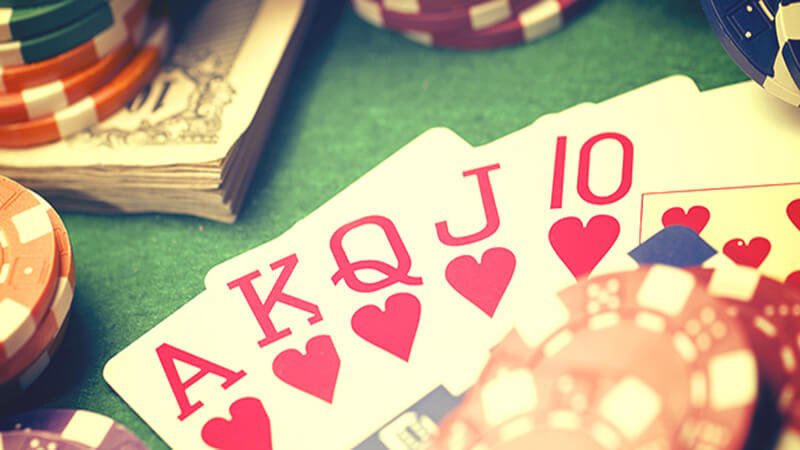 Like with any statement like this, there will be certain exceptions and circumstances that might make you think otherwise, but this is something that will hold true more times than not. There will be some times where it actually is right to slow play in poker online, but I will address those later. Here are the primary reasons why slow playing in poker isn’t a great idea in online play most of the time.

Here is a scenario that you will see quite often if you play poker online enough. Consider that you are in a no-limit ring game at your favourite online poker site. You’ve picked up a pair of tens and you are feeling pretty good about your chances to win the hand. If you just call the minimum bet before the flop with this hand, you might have a couple of callers behind you and a big blind that checks his bet, as well. Now, the flop comes and you see 10c-9c-2d. You’re probably feeling great at this point, as you’ve just hit it big with the nut hand. The big blind will check his bet and you might choose to check as well, just to see if you can set a trap. The players behind you might check their hands to see the turn. Here it comes, an Ace of clubs. After the big blind checks to you in this spot, you might try to throw a pot sized bet into the mix to make things interesting. All of a sudden, you notice that the player behind you had tripled your bet and it’s time for you to make a decision. You ultimately call, see a meaningless river card, and throw out another bet. Your opponent once against raises your bet and you call to see that he hit a flush with his 7c-4c. At this point, you are probably throwing things at your computer and claiming that the game is rigged.

If you play for long enough, you will see a number of hands just like that one. What could you have done differently while holding that pair of pocket tens? In short, there wasn’t enough aggressive play made in order to protect the strong hand that was flopped. The flop showed two clubs and a couple of connecting cards, which brought into the realm of possibility either a straight or a flush. With four players in the hand, there is a lot of chance for your nice set of tens to get busted by a weak hand. In addition, since you didn’t raise before the flop with your pair, you have the big blind and a couple of limpers in there with you. These guys could hold anything, so you never have any clue how to play against them.

What is the moral of this story? Slow playing in poker in most scenarios will just get you burned when there are a lot of players in each hand. If you hit what appears to be the nut hand off of the flop, then you have to protect it if there are suited or connecting cards on the board. Bet out and see what your opponents are holding. Even though it might seem unlikely to good players, there are guys out there who will play against you with the likes of 6-3, J-2, or any other garbage hand. The majority of poor players love to play any two cards that are suited, so you should take great care to protect against any potential flush draw. If there are multiple people drawing out against your made hand, then you stand a good chance of losing. Why would you give them a chance to hit a free card if you can help it? If they are going to put a bad beat on you, make them pay to do it.

Most new online players care too much about making the “perfect” hand. When they hit two pair or a set, they want to sit around and get every cent out of it. They don’t want to scare their opponents into folding. If you hold onto this mindset, then you will become extremely frustrated by the number of bad beats that hurt your bankroll. You have to understand that winning a small pot is better than losing any pot. Even if you only take down a few opening bets, this is still a positive step. It certainly beats losing money. You must also keep in mind that when your opponent draws out against your made hand, you are probably going to lose a big pot. By avoiding this big loss, you are making it much more profitable to play aggressively. The key to keeping yourself from falling victim to this is to bet against the people chasing their weak draws. You will still find players who are willing to pay to chase their inside straight, but the prevalence of this is much less when you’re making them pay to do it.

Your Hand IS Beatable

Too many players like to think that their top pair, set, or low straight is a perfect hand that can’t be bested. In reality, these hands are very susceptible to beating defeated by a table of novice, online players. You should be playing to get maximum value as quickly as your possibly can. There is a time, however, when you have a huge hand. This isn’t the two pair that you’ve fallen in love with. I’m talking about a full house or something similar, like the nut flush. When you hit these hands, there is basically no procession of cards that can allow your opponent to get back into the hand. When you have a full house, for example, you shouldn’t mind giving out a free card or two. In this scenario, you are actually going to want to slow play that hand in hopes of having your opponent catch a flush or a straight. When he finally hits that “miracle” flush card, you will have him right where you want him. This is the correct time to make a profit from slow playing in poker.

Keep in mind the strength of the players around you. Playing at an online site isn’t like teeing it up against Phil Ivey at the Bellagio. Online players are much more likely to play poor starting hands, especially at the lower limits. Keep your mind sharp and always think of possible card combinations that could beat your hand. Think about cards that you might not consider playing, but they might like to play. If you see that there is danger on the board, like two suited cards, then consider that slow playing your hand is likely to leave you angry. You might have to settle for a small pot every once in a while. If you win enough of those, you will have prolonged success. Be patient and wait on the real opportunities to make moves. This is where you will really make a profit.