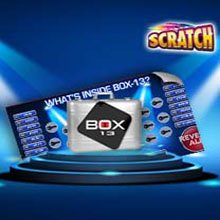 The Box 13 scratch card is a great fun gameshow themed scratch game from William Hill. Inspired by the classic Bob Monkhouse TV show, the Box 13 scratch card has a prize on every card ranging in value from 1p up to £1000 based on a £1 stake scratch card. The prizes will multiple accordingly the larger your stake, which can be played up to a maximum of £500 per game.
The Box 13 scratch card has sixteen prize values and plays in a similar style to Deal or No Deal. At the start of the game, fifteen panels will be displayed in the form of keys, each key hides a value. Each time you scratch a key panel, that value will be removed from the game and can no longer be won. At the end of each game round an offer will be made using the remaining values as a guide, you may then collect this offer or carry on, hoping for more. If you play right to the end, your final value will be the hidden value within Box 13 which will then be paid. 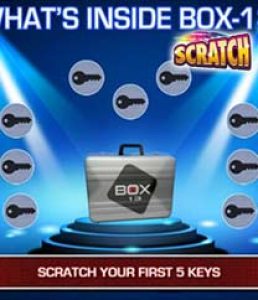 As you can see, the Box 13 scratch card is very similar to a game of Deal or No Deal, and as Deal or No Deal is such a popular game, there is little reason as to why you wouldn’t enjoy Box 13 just as much.
Each round consists of between three and five reveals, with each reveal eliminating that value from the remainder of the game. Accept the games offer after each round by pressing the ‘tick’ button, or decline the offer by selecting the ‘cross’. Accepting the offer will end the game, allowing you to continue to another Box 13 scratch card, declining the offer will progress you to the next round where the same process plays out again. You may continue this until the final round where just one reveal and Box 13 remain. The offer will be made according to the remaining values, and if declined Box 13 will be opened and paid as your prize.

The Box 13 scratch card has an RTP of 92% with a maximum jackpot available of £500,000 when played at the highest stake. Lower stakes will adjust the prize values accordingly, with the RTP remaining the same across all prices of play.