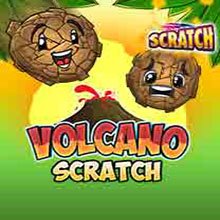 Volcano is a cute little scratch card exclusive to the Coral online casino. Unlike traditional scratch games, the Volcano scratch card uses multiple bonus features and wild symbols to enhance the game, bringing it more into line with modern slot machines, however you do still get the traditional silver panels to scratch off.
Playing stakes start at 20p, rising all the way up to £200 per game card which is in line with the majority of other Coral scratch games. Prizes start from one times your stake, right up to 1000 times your stake for a maximum win of £200,000 for three of a kind symbols, or £500,000 during the feature. You play Volcano is the normal way, with nine silver panels each hiding one of several game themed icons. Three of a kind pays a prize as displayed in the win table above your card, with three moons awarding one of two bonus features. 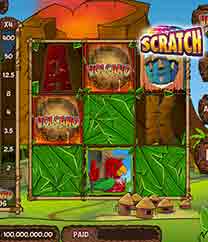 When you have selected your stake, scratch the panels to reveal your symbols. Any three matching pays a prize, you may also be helped along by revealing the Wild Fire symbol which acts as a wild and substitutes for all symbols except the moons. It is possible to win more than one prize per card, especially when a wild symbol is revealed.
The normal symbols are fun and frequent and pay good prizes, however the most entertainment comes from revealing three moons to play a bonus game.
Wild Rocks: The volcano erupts, shooting fiery rocks onto your scratch card. Each rock is a wild and can result in some large wins.
Volcanic Bomb: This little feature has huge potential and can pay up to 1000 times your stake. The volcano will erupt, exploding a cash multiplier of up to the jackpot.

As you can gather from the description, the Volcano scratch card is far from ordinary and has the potential to pay great prizes. This game is exclusive to Coral where you can play online many more scratch games, all with large prizes. Play here.