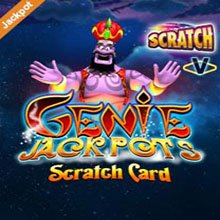 When you have chosen your stake, click the ‘play’ button to purchase your first scratch card. The panels are made up of nine genie lamps rather than the more traditional silver panels, but they work in the same way. Either click each lamp to reveal the hidden value or symbol, or simply click ‘reveal all’ to save a little time and have the game play it for you. 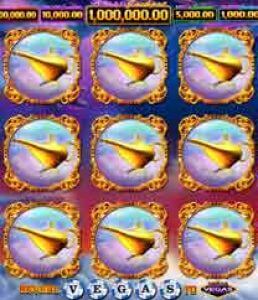 As with regular scratch cards, the Genie Jackpots scratch card pays for three matching symbols in any position. The wins are made up of multipliers, and are multiplied by the value of the stake you are playing at. For example, revealing three 50x symbols whilst playing at £2 per game would award a prize of £100. The maximum win per card, excluding the VEGAS Millions cannot exceed £500,000. The VEGAS Millions progressive jackpot will pay the current value of the awarded pot, from one of five available.

The Genie Jackpots scratch card combines regular wins with bonus features much in the same way as the slot machine does. The Treasure Chest bonus is awarded when three bonus symbols are revealed, taking you to the treasure room where the Genie awaits to award an accumulative cash prize. Pick one of three lamps for the Genie to pour money out of the treasure chest. Each successful pick increases the amount of money awarded until a ‘collect’ is selected within one of the lamps, this will then end the feature bonus with all winnings added to your cash balance.

The Genie Jackpots scratch card is available online only at Coral and has a return to player of 95.81%.