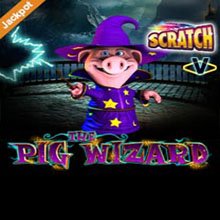 To play The Pig Wizard scratch card, start off by choosing your stake then clicking ‘play’. At the start of the game a scratch card will be displayed with nine panels. The panels are in the form of magic spell books, each housing a hidden symbol that is only revealed when the panel is scratched off or the ‘reveal all’ button is pressed. Three matching symbols pays the prize displayed, or awards one of the bonus rounds. 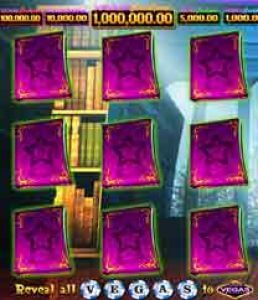 Reveal three hidden Treasure Chest symbols to be taken to the bonus round where you will be rolling the dice to collect potions, multipliers and crystal balls. There are a total of three potions on the bonus trail, each awarding a different type of game. Find a ghost to create a haunted version of the Pig Wizard. The ghost will move around the board collecting additional potions and multipliers. There is also a mystery add which increases the current win as well as increasing the value of the multipliers around the board. Additionally there is also a curse and magic dash, the curse can lead to a game over, the magic dash adds a selection of icons from the bonus board.

The standard bonus game is often very rewarding, with all winnings paid as a multiple of the stake which triggered the bonus. The biggest win by far on the Pig Wizard scratch card is the VEGAS Millions progressive jackpot. During any Pig Wizard scratch card game, if the word VEGAS is displayed, the VEGAS Millions bonus game is awarded, offering one of five progressive jackpots ranging from reasonably small sums, up to the massive Vegas Jackpot which is often over £1,000,000!
Spin the wheel to determine the value of the jackpot, and although all jackpots can be won on any of the stakes, the higher the stake, the better your chances of winning a bigger progressive jackpot.

The Pig Wizard scratch card is similar in style to the Plants vs Zombies scratch card, and although both offer a progressive jackpot, the Pig Wizard has the larger VEGAS Millions which is linked across multiple games, including slots and roulette. This allows the jackpot prizes to become life changing sums of money and are available exclusively at Coral.