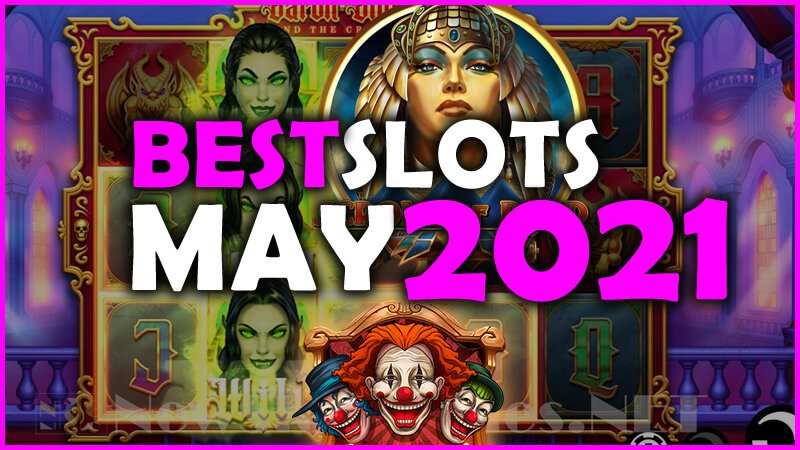 May 2021 was a great month for slots, with a series of innovative releases hitting the online casinos, as well as the usual plethora of Megaways slots. Plus, we had some slots with a truly mammoth potential to keep the big win hunters satisfied. Let’s dive in.

iSoftBet came out with this Megaways slot based around Sherlock Holmes’s arch-nemesis Moriarty, and what a great-looking slot it is too. The vibe is dark and smoggy, just like the Victorian London where Moriarty, Watson, and Sherlock pitted their wits against each other. Features wise, there are cascades, wilds, and mystery symbols, while the free spins are where the big wins are to be found. Unlimited multipliers in this bonus feature can see you win up to 37,500x your stake.

Instalment number 4527 in Play n’ Go’s Book of Dead series is Scroll of Dead, and while the Egyptian theme probably is a tad overplayed at this point, this slot still manages to entertain and surprise. For a start, the free spins unlock a 6th reel, and additional scatters during this bonus add extra spins. The usual random expanding symbol is also in play. And while the max win potential is still on the low side (7500x), Ancient Egypt fans aren’t likely to care and will play Scroll of Dead again and again… until Play n’ Go release the next title in the series.

This Thunderkick title might be quite a mouthful, but Baron Bloodmore & The Crimson Castle is the kind of classic spooky slot that would be perfect for Halloween. Why it ended up dropping in May is anyone’s guess, but it looks great, has a decent set of features, and comes with big win potential. The symbol set includes various vampires, wolves, and gargoyles, while massive mystery symbols add intrigue – and decent wins – in the base game. They are also guaranteed to land in each spin in the free spins round, while the Crimson Cash bonus game sees you play with symbols containing multipliers (up to 50x). It’s crazy volatile, but that doesn’t seem to put off most slot players these days, so Thunderkick probably will have a hit on its hands.

NetEnt’s Dazzle Me Megaways is a simple take on the popular mechanic, with a bright and happy colour scheme and a focus on wilds. In the base game, dazzling wild reels sees the middle reels filled with wilds, which practically guarantees a win. The avalanche feature sees more wilds get added on each respin during the free spins, which is where the bigger wins come.

Red Tiger also has a megaways title up its sleeve. Pirates’ Plenty looks sublime, with a dark colour scheme that perfectly complements the shiny reels and colourful characters who spin on them. Map symbols are collected to unlock max ways to win (over 200,000), while Lady Anne fully expanded wilds come with multipliers of up to 8x. There’s a monkey that appears at random as a sticky wild (and removes the low pays), and a free spins round. Pirate slots are always great fun, and this casino game is no exception.

This medieval slot from Kalamba looks a bit… meh. But it follows the popular Kalamba playbook of collecting symbols during the base game which then triggers the free spins round. I personally enjoy watching my progress towards the bonus round, and with classic symbols such as fruit and bells on the reels, this slot works for me. There is a cashpot jackpot bonus, as well as the standard free spins, where the number of spins, as well as multiplier, depends on which meter you fill up first. Joker Times comes with a max win of 21,000x which should be enough to satisfy the streamers.

NoLimit City has produced some of the most innovative and visually stunning slots over the last year or so, and they hit another one out of the park in El Paso Gunfight. Named after a famous pistol battle in 1881 (also known as Four Dead in Five Seconds), this slot has a Western feel, a 5-reel grid with 43,334 ways to win, and a choice of volatility settings (high and extreme). The slot makes full use of the xNudge mechanic, respins, and comes with no less than 3 free spins rounds. With max wins of 44,440x up for grabs, El Paso Gunfight is another impressive release from this developer, and we can’t wait to see what it comes up with next.

This Big Time Gaming slot basically only has one thing going for it – the win potential. But oh boy, with a max return of 46,000x in the base game, and 114,000x in the bonus round, Wild Flower is sure to prove popular, despite its basic design. The theme is an esoteric one, with pentagrams, wolves, moons, and witches featuring as symbols, and two free spins rounds, one of which comes with 12 free spins, and 800x multipliers.

If you suffer from coulrophobia (fear of clowns), we advise you not to play 3 Clown Monty by Play n’ Go. The face-painted funny men in this slot are every bit as creepy as Pennywise and add a dark twist to the game. Multiplier wilds give good potential for big wins in the base game, and the free spins round comes with another potentially lucrative round built-in. This Monty Spins bonus is triggered by landing 2 or more scatters within the free spins round and features multipliers that don’t reset, and sticky wilds. There’s the potential for 20,000x wins here, as long as you can stomach those creepy clowns.

Play N’ Go gets a third entry on this month’s list with Hammerfall. It’s another of those slots from this studio based around an obscure Scandi metal band. As well as the usual rock screeching, and generic guitar soundtrack, the slot features a scary looking knight who bears a passing resemblance to The Mountain from GoT. He stands to the right of the 7×7 grid, made up of colourful gemstones, which form winning clusters, and there’s an avalanche system going on too. Consecutive winning clusters are added to a hammer meter on the left, and once you build up 25 of them, you get some modifiers added on to the next spin. It looks really good, and the hammer meter means that Hammerfall is quite a decent slot to play, but the soundtrack was pretty off-putting for me.

Primate King slot comes from Red Tiger, and as the name suggests, embraces a King Kong theme. There are not many of those around, to be sure, so fans of the movies will give this one a go. They will love the graphics, which are drawn in a cartoon style, as well as the range of features in the base game, with our favourite being the angry gorilla which randomly removes the low pays from the reels. There’s no free spins round here, but wins of 10,000x are possible, which is pretty high for this studio.

The last of the Megaways titles on our list, All41Studio’s Joyful Joker is a simple-looking game with a classic symbol set made up of fruit, bells, and Lucky 7’s. But we do get a multiplier side wheel which brings plenty of excitement, particularly when it works together with the avalanche feature (called Rolling Reels here), as each successive respin adds a +1 multiplier. This feature carries over to the free spins, and the multipliers are unlimited, so 23,000x is possible. It just goes to show to even simple designs can wow slot fans as long as enough moolah is at stake.

No less than 12 slots made the cut in the month of May, a new record for the year. It seems that developers are really bringing out their big guns after a slow start to the year. With the Euros about to kick off, most likely slot studios will take it easy over the summer, although you never know.