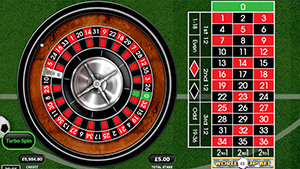 My Biggest Run on Roulette Numbers

It’s not often I have long winning streaks on bookies roulette (or any roulette for that matter), sure I’ve had 6, 7, 8 winning hits in a row, but nothing like this. My biggest run on roulette numbers happened in Betfred bookies on the very popular 20p Roulette by Inspired Gaming. I planned to start with £200 and have a bet per spin of the maximum which is allowed on the FOBTs of £100. For bets above £50, you need to print a slip which authorises the higher stakes, to obtain this all that is needed is the bet value to be anything above £50, when you press bet a notice will display asking you to confirm your bet size, it will then print a receipt with a zero value which then needs to be scanned at the counter before being re-inserted into the fixed odds betting terminal. The spin then happens automatically as ‘bet’ had already been pressed.

With my £200 inserted into the FOBT roulette game, I proceeded to bet on 18 numbers from black 10 to red 32. This covers the entire right half of the wheel and excludes zero (I rarely bet on zero). Each number had various chips placed on them, my favourite number; 11 had the maximum of just under £14, my least favourites; 6 and 36 had £2.20 and £2.60 respectively. Either side of number 6 had pretty big values placed on them, 27 had £9 plus £5 on the split and 34 had £9.20 straight-up.
With all bets placed I pressed the bet button and watched as the 20p Roulette game produced my first result; 6!

It was a hit, but it was my least favourite number and actually returned less than the stake (£79.20), which many roulette players would consider a bad bet. Undeterred I repeated the bet and hoped for the best..

A Run of Numbers on 20p Roulette

Interestingly, 20p Roulette in the bookies has a very standard animation which may explain its popularity (it’s the most popular roulette game on the FOBTs). The roulette ball always stops opposite to where it starts. This doesn’t help you win of course, but it does let you know the outcome before the ball has completed its spin. Not everyone likes this, and many people look away at the start of the spin, but when you look back you can see roughly where the roulette ball will stop. And this one was heading straight towards my favourite number; 11!

Straight in to number…30! I’m not 100% accurate when guessing where it will land, but I’m pretty close. 30 was a good hit all the same, with £4 straight-up and £5 on the split. This returned £234, so a nice profit from that spin. The next spin was number 4 which had £7 straight-up and returned £252. This was my third winning number in a row and the beginning of my biggest run on roulette numbers.

Many people know FOBT roulette is controversial, this comes down to the speed in which you can play; simply repeat the bet and press spin. At this speed I’m pretty close to the maximum spins allowed of three per minute, or one every 20 seconds! A real-world casino aims for a spin every 90 seconds, so a pretty big difference.

The ball was spinning, and it was coming close to an earlier number; 6. I knew it was a winning spin, and then it landed straight into…6! Right in the middle of 27 and 34 again, returning £79.20. I’ve never liked 6, I like it even less now.

Repeat. Spin. I know where this one is heading! It stops right on 11 and returns £499.50. My biggest run on roulette numbers is now on the fifth spin. Five in a row, not bad but not unheard of.

The following two spins hit 2 and 15, both pretty low numbers but still keeping my streak alive, with my biggest run on roulette numbers now at seven winning spins in a row. The next roulette spin hit 11 again! Paying another £499.50, followed by 8, followed by 32 and then 11 again! My playing balance on the fixed odds betting terminal was now at £1627.20 with my biggest run on roulette numbers streak standing at eleven hits in a row!
The following two number were 30 and 11 again, that’s four number 11’s in thirteen spins, taking my FOBT balance to £2160.70. The next press hit 6 again, so 6 was kind of my Ying to 11’s Yang, still can’t complain though.

The next press I knew wasn’t anything good, then my phone rang which cut off the camera. I really should put it in flight mode. This time it was number 31, a lose! My FOBT balance from 20p Roulette was £2039.90. I collected the ticket and cashed out, as I know how quickly these can go bad.

My biggest run on roulette numbers ended with fourteen winning spins in a row, with four number 11’s, three number 6’s and two number 30’s.
To catch a streak like that is rare, to catch it on the maximum stake from the very first press is virtually unheard of, so I doubt I’ll be seeing anything like that again in a while.