Dazzle Me is a gem slot game by NetEnt, released in August 2015, and it features five reels with 19 symbols, which is just short of a 4×5 setup. The Dazzle Me slot has two reels with three symbols each, then two reels with four symbols each, and the fifth reel has five symbols. It all combines into 76 paylines. Bets can range from 0.20 to 20 in your playing currency.
The Dazzle Me slot is a relatively new release in Coral and Ladbrokes betting shops, both of which use a maximum of £500 for the jackpot.

Three or more Free Spin Scatter symbols anywhere on your reels trigger the free spins game, and you’ll get 8, 12 or 16 free spins for 3, 4 or 5 Scatters respectively. During the free spins bonus, the Linked Reel feature is activated. What this means is that identical-sized reels will be a copy of one another, so you’ll get same symbols on reels 1 and 2, and same symbols on reels 3 and 4. This will greatly improve the chances of landing a big win.

There are only six symbols in the game, which is good for the player as the wins should be easier to come by, and the symbols are stacked on the reels in a similar way to the Golden Goddess slot. There are four gems: Blue, Green, Purple and Red, none of which pay too much. The best symbols in the game are Bell and 7, as they pay a lot, and you’ll want to see them on your reels as often as possible. So it’s actually the gems that you don’t want to see in this gem based game! 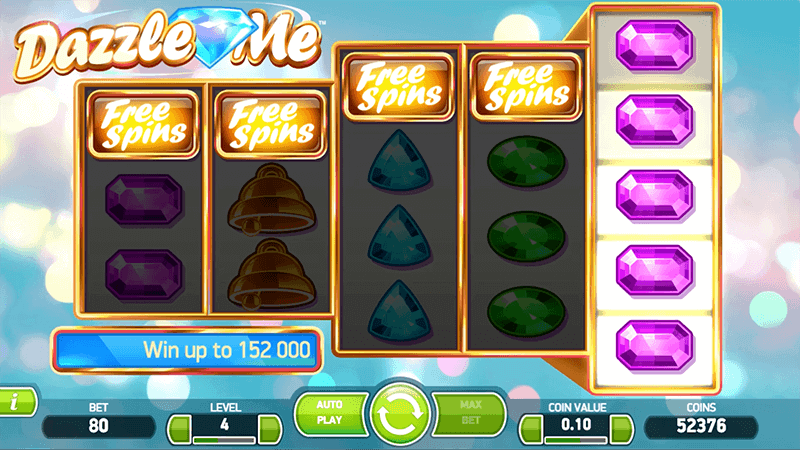 The graphics on the Dazzle Me slot machine are not bad for a gem game, all the symbols are finely detailed, but the two most important symbols are difficult to immediately distinguish from the gems. But that’s just a minor issue as gem slots aren’t expected to look different than what NetEnt did here.

There is no Wild symbol in the game, but there are Dazzling Wild Reels, which appear randomly during base game, and the entire reel; up to all five of them, can become Wild. In a way, this is much better for the player as it replaces those small wins that would come from a single Wild with much bigger wins that come from an entire Wild reel or multiple Wild reels.

Wins aren’t that common in Dazzle Me. Most spins end without a win, and when wins do come your way they’re usually small. Theoretical return to player (RTP) is whopping 96.90%, but the game doesn’t feel that rewarding at all, most of the time. So while the relative scarcity of wins may hinder with the playability of the slot, rest assured it’s a high-paying slot game, and it’s worth playing. Big wins are possible already in the base game, and those big wins will come your way sooner or later.

Dazzle Me is a good slot game for patient slot players, especially those who like gem games and the 3-3-4-4-5 reel setup. The game also plays well on mobile devices and is available at numerous online casinos, most that run on NetEnt software.