Nitro Circus slot is a crazy new game from Yggdrasil that takes gaming to a whole new level. In fact, it’s fair to say that this is a slot that really can be considered a game thanks to its remarkable features and high level of entertainment. This is apparent from the moment you start up the slot, with a high-energy introduction and fast-paced music while you play. Some of the features include picking your own vehicle with different stats and collecting items to improve your payouts. It’s a true gaming experience, and I’ll explain in more details how it works shortly. Talking about stats, Nitro Circus slot has a 5×4 reel set-up with 25 paylines, paying left to right as you’d expect. You need to spin the reels to try and get a winning combination on these paylines using the base symbols which are as follows, ranked in ascending order based on their value: 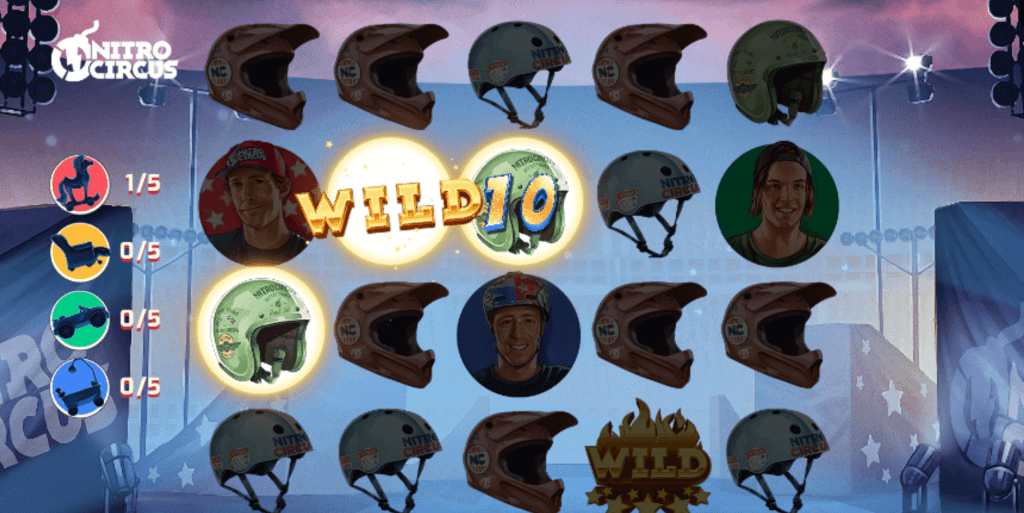 It’s worth noting that the Red Rider is significantly more valuable than the other symbols in the game so be sure to keep an eye out for him. There are also a few special symbols in the game. Of course, you have the Wild symbol which substitutes for all of the above symbols in a winning combination. There’s also a special Nitro Bomb symbol which is used to trigger the Nitro Free Spins Bonus or the Nitro Blast Mini Game as I’ll explain shortly.

Nitro Jump Bonus. This is the most interesting and unique feature on offer with Nitro Circus slot. It’s triggered by landing 5 Nitro letters on the reels. First, you must collect items on your 3 warm-up jumps which could be either a cash prize, a speed boost which increases your chance to get a bigger multiplier on the last jump, or a fuel can which adds a multiplier to the total cash prize collected from the jumps.  You must choose a vehicle to play the bonus with and each of these has different stats, much like a video game. The trick stat gives you a higher chance of getting a cash prize, the boost increases your chance of a higher multiplier on the last jump and the size increases your chances of getting more items. Additionally, once you complete a collection you’ll be given a go on the Nitro Jump course, and this is reset after the run. The speed boosts collected will be added to your overall boost, and you must click the Red Nitro Blast Boost button for more boost before the timer runs out, which increases your chance of a better multiplier. Watch out though, because if you crash you’ll be given no multiplier. Furthermore, if you manage to collect 5 of the same vehicle, you’ll be given a run on the Nitro Jump course with that vehicle, again having its own stats that have different properties.

Nitro Free Spins Bonus. Back to the more traditional features that you might see in other slots, this one is triggered by landing a certain number of Nitro Bomb symbols on the screen. 3 bombs will give you 10 free spins, 4 will give you 20 and 5 will give you the maximum number of 30. The great thing about this Bonus is that another bomb symbol appearing during the Bonus will trigger the Nitro Blast Mini Game. This will give you one of many awards including 1, 2, 3, 10, 20 or 30 free spins, a +1 multiplier, Wild or one of the vehicles. Furthermore, landing 2 bomb symbols just during the base game will trigger the Nitro Blast Mini Game Bonus and offer you either a vehicle, Wild or 10, 20 or 30 free spins. 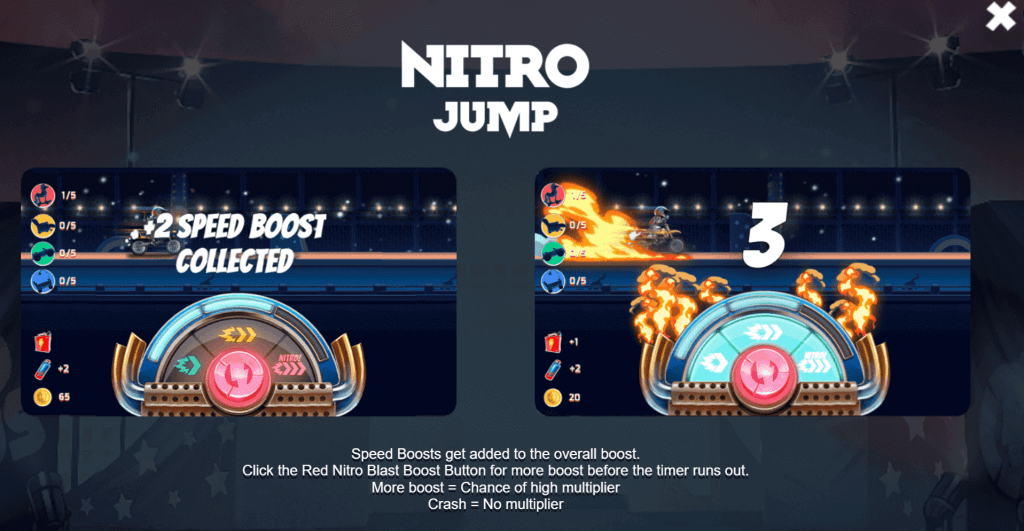 Nitro Circus slot from Yggdrasil is one of the most feature-rich and intense slot machines I’ve ever come across. It’s so in-depth that it feels more like a proper video game with things like vehicle stats and collection items while you’re racing. There’s a lot to understand in how it works, but once you get to grips with what’s going on and the rewards on offer it’s an incredibly fun game. Yggdrasil have really gone all out here, as they often do with so many slots, to provides a truly entertaining, but still rewarding experience. It doesn’t go unnoticed and really raises the bar in terms of what a good slot machine can offer. I hope that this encourages other developers to add more of an entertainment element into their slots moving forward but now, Nitro Circus slot is the one to play.