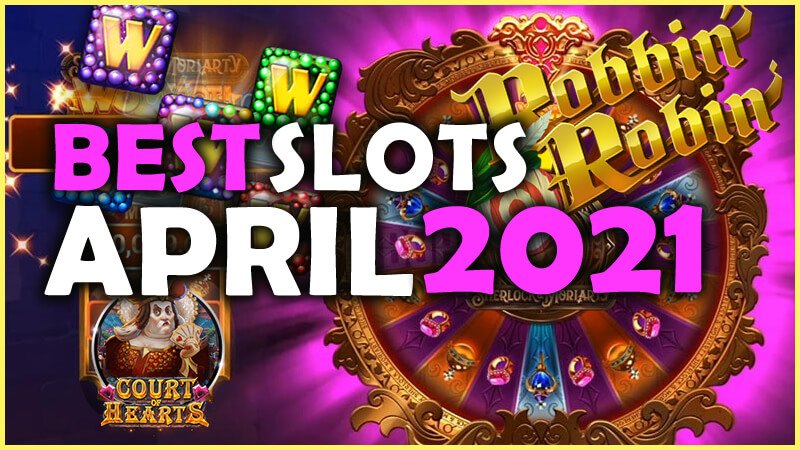 April 2021 was the best month of the year (so far) for slot fans, as our reviewers found no less than 10 casino games with a score of 8/10 or higher. But did the most high-profile release – Gordon Ramsay Hell’s Kitchen slot – make the cut? Find out below.

Inspired by Alice in Wonderland, Court of Hearts is a Play n’ Go title that looks great and has enough features to please any slot fan. The cartoon style is beautiful, with symbols including characters from the Lewis Carroll book, such as the rabbit, the mad hatter, the prince, and the queen. The base game has a couple of bonuses to look out for, the first of which has 3 wild features, including a fully stacked Cheshire Cat. A rabbit reward feature adds 2 scatters to the screen, which does of course help in the triggering of the free spins. In this bonus, you can take advantage of an unlimited win multiplier, which is where the max payouts of 8500x come into play.

Relax Gaming’s Book of 99 slot is set in Ancient Greece, with not much in the way of theme or standout features to set it apart from a thousand Book of Dead rip-offs. In fact, there is only one reason this slot made it into our top 10 – and that is the incredible RTP of 99%. There aren’t many slots you can play these days with that kind of return, so slot fans will be intrigued at playing with such a low house edge. Book of 99 looks decent enough too, with a cyclops and a pair of foxy ladies to keep us entertained as symbols. You trigger the free spins either by landing 3 book wilds, or by collecting 99 of them on a meter to the left. A special expanding symbol is chosen at random and will be responsible for your biggest wins, and the max payout here is quite impressive at over 12,000x.

Crystal Quest Frostland by Thunderkick follows the adventures of flame-haired explorer Gemma as she journeys through the icy frost lands in search of big wins. The reels are a simple set-up with a 6×4 grid, and symbols made up of variously coloured jewels, a monster, and the crystal queen herself, who is worth 5x your stake for 6 of a kind. That’s pretty low, but the avalanche feature comes with a progressive multiplier, and the massive symbols combine with this to provide some pretty good action in the base game. The free spins round has more of the same, but with the added bonus of the win multiplier not resetting between free spins, as well as guaranteed avalanches even on losing spins, thanks to the exploding wilds.

Iron Dog’s Robbin Robin explores the overdone Robin Hood theme, but the pleasing design, medieval soundtrack, and intriguing free spins round more than makes up for it. The 5 reels and 4 rows spin on a backdrop of old Nottingham, where symbols are made up of pints, hats, quivers, and bags of gold, while a golden lion acts as the wild. The free spins round changes depending on which character from the original tales triggered it. For example, Little John increases your win multiplier by 1x, while Alan A Dale removes the lowest paying symbol from the reels. Robin Hood is probably the most fun, though, as he expands to cover the whole reel.

Cluster Slide slot by Elk is heavily inspired by the popular Reactoonz, but in our view, this is an even better game. Like the Play n’ Go favourite, we have a 7-reel, 8-row grid made up of colourful critters on a space-age backdrop, with an avalanche mechanic allowing for fast-paced action. Oh, and paylines are formed by clusters, of course. Winning clusters are added to a meter which, when full, award one of 5 feature wilds, including upgrades, low-pay removals, multipliers, and massive symbols. The main bonus just gives you 3 free spins, but each of these has powerful wild modifiers, which can win you up to 10,000x. Cluster Slide is a very fun slot to play, and the soundtrack is pretty awesome too.

Thunderkick’s Big Fin Bay is a nautical-themed slot that at first glance looks like a megaways title. There are 6 reels, with the number of rows changing on every spin. Symbols are made up of fish of varying colours, and the pipe-smoking captain, who pays out the most. The golden marlin acts as a wild, and when it forms part of a win, it expands to fill the entire reel. It does the same in the bonus game too, but also triggers a respin, and adds another wild to the reels on that respin. Those free spins allow for 117,649 ways to win, and Big Fin Bay can haul in an impressive catch of over 15,000x on a good day’s fishing.

This foundry-themed slot from the Stormcraft studio has an austere-looking design and a basic, 5-reel set up. But what it lacks in frills, Fire Forge slot certainly makes up for in win potential. The symbols are similar to those involved in mining slots, with lanterns, gloves, hammers and anvils. Five or more scatters trigger one of three jackpots, with the biggest (gold) paying out at 200x your stake. The free spins bonus comes with a choice of the number of free spins/initial multiplier. It all depends on your risk appetite of course, but the multiplier is incremental and can go all the way up to 200x. What size of wins can these bring? According to the developers, the maximum payout is a massive 50,000x. 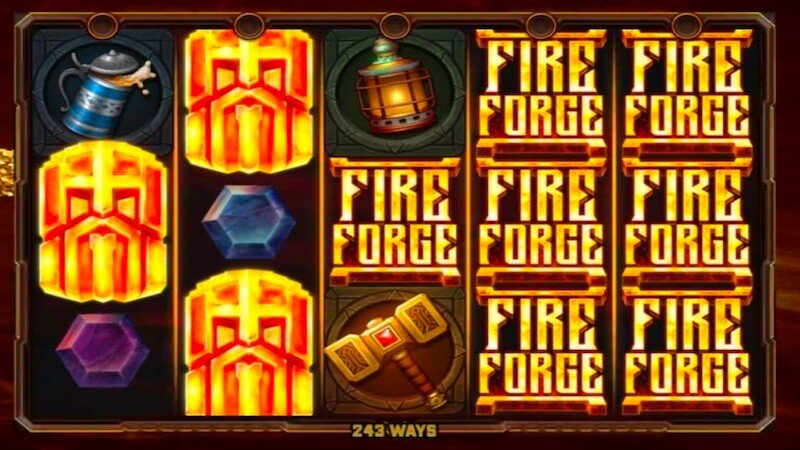 Yggdrasil decided to make a sequel to their popular Easter Island slot, and it works well. Once more, the two giant heads (known as moai) flank the grid, while the 6 reels have plenty of surprises up their sleeves. Each win triggers a respin which turns the low pays into the previous winning symbol. Wins involving 4 or more symbols come with respins of colossal blocks, and 6 of a kind wins also trigger expanding reels with 55 paylines. With low volatility and a modest (2500x) max payout, Easter Island 2 is the kind of slot perfect for an evening of relaxed casino action while dreaming about an island paradise.

This Red Tiger slot comes with a steampunk/art nouveau theme, as the action seems to take place in a plush cabin aboard some Zeppelin-style aircraft. The reels start off with a simple but elegant 3×3 grid. Symbols involve old telephones, gramophones, planes, trains, and automobiles. Three of the wheel symbols allows you to spin the Wheel of Amp itself, where you can win one of 3 features, including expanded reels, win multipliers, and the free spins bonus. In this main bonus feature, you get 10 free spins and an incremental multiplier that does not reset between spins.

Microgaming has a habit of releasing simple-looking slots with an air of mystery about them, and this Sherlock title is no different. We follow the famous private detective into the smog-filled streets of Victorian London, where he struggles once more with his arch-nemesis Moriarty, as a creepy-ass tune plays in the background. Sherlock and his sidekick Watson feature as symbols, and the raffish-looking Moriarty is the scatter. During the base game, magnifying glass symbols are collected, with the aim of triggering the jackpot wheel. This is your standard Microgaming progressive jackpot, but the Wowpot prize goes as high as a staggering £2 million. In the free spins round, mystery symbols bring various goodies, including sticky wilds, extra free spins, and a 1+ multiplier.

Wow (or rather Wowpot), April showed slot developers came back into top form after a rather underwhelming start to the year. Let’s hope it continues for the remainder of 2021. What was your favourite game of the month?